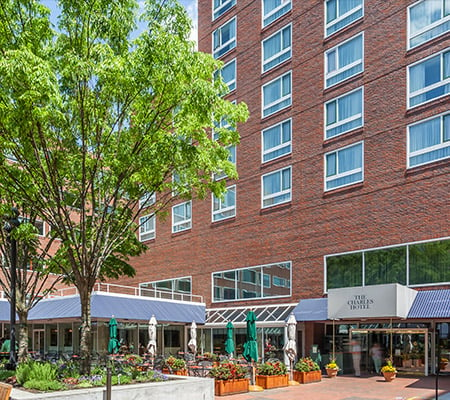 Our front doors open to the quaint and quirky charisma of Harvard Square. The bookstores, the Ivy League bustle, the sidewalk cafes and eclectic shops.  Pick your pleasure, you’re mere steps to it all. Anticipate waking up surrounded by inspired experiences in all directions, with the funky architecture of MIT at one end and soaring spires of Harvard University at the other, and the tree-lined banks of the Charles River flowing alongside.  Check-in to a remarkable Ivy League scene with sophisticated taste, and fill up on these Cambridge and Harvard Square pursuits:

A must for any Cambridge visit: A stroll through the 22 acres of sprawling green lawns and 18th-century buildings covered in ivy. Reminisce about your own college days while passing historic architecture, libraries, student dorms, and teems of university students and professors.   Yes, there’s that snowy scene in Love Story. And, yes, you must re-create it. 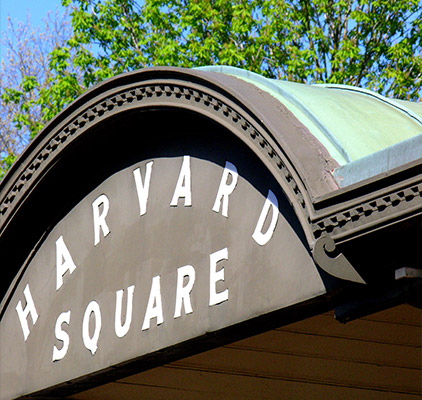 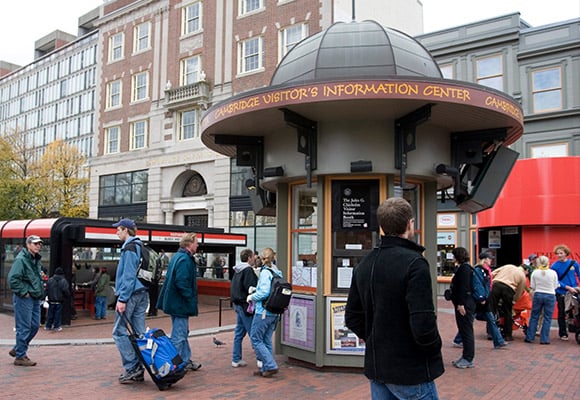 Zip along the banks of The Charles River with one of our complimentary six Electra Amsterdam Classic Bicycles equipped with shopping baskets. Keep up the pace with joggers training for the Boston Marathon or pause for a picnic along the water. Ask the concierge for more information.

**For car-free biking fun, check out Memorial Drive, which runs along the Charles River. Memorial Drive is closed in Cambridge between Western Avenue and Mount Auburn Street on Sundays from 11:00am to 7:00pm from the last Sunday of April until the 2nd Sunday of November.**

Catch foreign, cult, indie or classic films at this beloved art house theater, featuring a single movie screen and a history that dates back to 1953.

Home to M.I.T. and Harvard University, it’s little wonder Cambridge is brimming with bookstores feeding both the curious and the intellectual. Check out some of our favorites: the independent Harvard Book Store, Porter Square Books and Pandemonium Books and Games.

Snag one of our bike rentals or enjoy an early morning run along the Charles River, with views of rowing teams, graceful bridges, and the shining Boston skyline. Or, rent a kayak or canoe for your own paddle adventure.

Reconnect with your food. In the Spring & Summer, The Charles Hotel Lower Courtyard is home to the Charles Square Farmers’ Market, featuring vendors from Massachusetts and New Hampshire farms. The market is held on Fridays from 12-6pm and Sundays from 10am-3pm, and serves organic produce, herbs, cheese, bread, pastries, jam, and fruit. SPECIAL FOR WINTER 2019-20! The Winter Farmers Market is back in the Lower Courtyard during the same hours with rotating vendors.

Take a seat for an enthralling theater performance at A.R.T., located on the campus of Harvard University and recognized as the 3rd best regional theater in the country by Time Magazine.

When it comes to authentic ethnic eats, locals flock to this diverse neighborhood off-the-beaten path for Brazilian barbecue at Midwest Grill, Portuguese fries at Casa Portugal, and Irish shepherd’s pie at The Druid.

Get curious and discover special exhibits showcasing the natural world, science, and human cultures. Visit the Harvard’s Glass Flowers, find your birthstone gem, and observe how one dinner served in 1910 forms the centerpiece–literally–of war-time ritual and tradition in the new Peabody exhibit Resetting the Table: Food and Our Changing Tastes.

Located on the campus of Harvard University, the museums are just a short walk from the hotel. Ask the Concierge team about an exclusive discount for your visit! Admission to one allows entrance to both museums plus the Harvard Museums of Science & Culture partner museums.

SPECIAL OFFER FOR HOTEL GUESTS: 2-for-1 admission. Ask the concierge how to take advantage of this special admission.

Indulge in a day of museum-hopping, right on Harvard University’s campus. Check out renowned magnificent oil paintings and sculptures from German-speaking Europe at the Busch-Reisinger Museum. Spend an afternoon soaking in the vast collection of rare paintings and sculptures from the Middle Ages to now at the Fogg Art Museum. Then, get blissfully lost among the hallways of the Arthur M. Sackler Museum, graced with Chinese bronzes, Buddhist cave temple sculptures and ceremonial weapons.

SPECIAL OFFER FOR HOTEL GUESTS: 15% off on all Sightseeing Cruises. Ask the concierge how to take advantage of this special discount.

Enjoy a 70-minute, fully-narrated sightseeing cruise along the Charles River. Your captain and crew will both entertain and educate while pointing out the historic and cultural sights of Boston and Cambridge. Sights include Beacon Hill, Esplanade Park, the Back Bay, Boston University, M.I.T., Harvard and countless sailboats and rowers! Sightseeing cruises depart from Lechmere Canal Park at CambridgeSide. The ticket booth and boat departure is located outside the doors by the food court and H&M store.

From artificial intelligence to architecture, 3D holograms to oceanography, satiate your inner techie and scientist at MIT’s museum showcasing 150 years of education and research.

From Fanueil Hall to Boston Common to the Freedom Trail, this city has an undeniable cache of culture and history known the world over. Locals burst of Yankee pride and it’s easy to see why: Boston is home to spirited neighborhoods like Beacon Hill, Back Bay and North End, along with locavore restaurants, chic shops, and intriguing galleries – all reached by scenic strolls.

Or, jump on the subway or in an Uber/Lyft to get around one of the country’s most exuberant cities.

Boston is where history unfolded, from the Boston Tea Party to the Battle of Bunker Hill, to the country’s first public school. Once you step foot on the city’s cobblestone streets, it’s only a matter of minutes until you reach a historic site, reliving the days of the first colonists and forefathers. Wind your way around the city on the Freedom Trail, connecting 16 sites from the start of the American Revolution. Peek into the rooms and hallways of Paul Revere’s home. Then, toss your own crate of tea into Boston Harbor off of the Boston Tea Party Ship.

The city’s history shares the stage with an exuberant arts and culture scene. Us locals know this well – our calendars are packed with visits to libraries, museums, symphony orchestras, contemporary art galleries, and theaters. Catch an alfresco concert at the Hatch Shell. Revel in the Boston Pops at Symphony Hall. Lace up for a day of exploring the Museum of Science, Museum of Fine Arts or the Children’s Museum.

Founded in 1870, the Museum of Fine Arts, Boston, welcomes more than one million visitors each year from neighboring communities and around the globe. It is one of the great encyclopedic art museums in the world, with collections comprising more than 500,000 objects representing all time periods and cultures. The Museum has more than 140 galleries displaying its collection, which is widely recognized for its quality and scope. In addition to housing renowned collections, the Museum also offers numerous exhibitions and opportunities for learning and community engagement.

Just imagine getting up close and personal with a 65-million-year-old Triceratops fossil, witnessing an indoor lightning storm in the iconic Theater of Electricity, walking among butterflies, or taking a journey inside the human body! While you are here, don’t miss the opportunity to explore the galaxies in the Charles Hayden Planetarium or take in a larger-than-life immersive and inspiring film in the Mugar Omni Theater, featuring New England’s only IMAX® Dome screen. With 700 interactive exhibits, exciting exhibitions, daily presentations, hands-on activities, and live animals, there is something for everyone! Create, experiment, and have fun at the Museum of Science!

Start your journey with the Aquarium’s charming penguin colony, before experiencing 360-degree views of the spectacular four-story Caribbean coral reef teeming with sea turtles, sharks, moray eels, and tropical fish. Meet the colorful residents of one of the ocean’s most happening neighborhoods, an Indo-Pacific coral reef, and learn about its vital role in the lives of many marine animals. From sea jellies to sea lions, you will explore our blue planet without leaving downtown Boston. Also, enjoy a movie on New England’s biggest screen at the Simons IMAX® Theatre.

Craving seafood? You’ve come to the right place. Boston and the New England coast are brimming with all it – all fresh, all local. Not much can top fresh steamed lobster, creamy chowda, and oysters on the half-shell, all harvested right on our shores. From intimate eateries to chef-led hot spots, you’ll find local seafood on almost every menu. Including every day at our very own Henrietta's Table and Benedetto!

But don’t stop there, devour flavor-packed Asian dishes in Chinatown and decadent pasta plates in the North End and discover eclectic cuisine stretching across the city. Don’t miss browsing and biting your way through Fanueil Hall Marketplace, an expansive food hall and market with 50+ eateries. Whatever your mood, you’ll find it: From lobster rolls, to pastrami sliders, to wicked good cupcakes. Nibble on that.